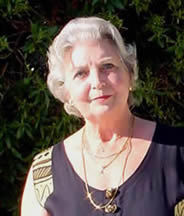 After Art College (now part of the University of Wales), Mai began painting professionally in 1950. She enjoyed painting in many countries, from the UK and the Continent to S.E.Asia.

“It was an honour to paint so many portraits of both His Majesty, Sultan Hassanal Bolkiah, and his father, the Late Sultan Omar Ali Saifuddin.” said Mai when interviewed by Qatar Television. The interview led to a feature length documentary of Mai’s Life and Work.

Also commissioned and hanging in the Lapau (Palace of Government) are five retrospective portraits of earlier Sultans.

In Qatar, Mai completed official portraits of the Emir and the Heir Apparent (now the Emir), other Royal family members and HM The Queen for the British Embassy.

Over eighty of her paintings, including landscapes, hang in Palaces, Government Offices, Embassies and Stately Homes but many more are in smaller, private collections all over the world. It has not yet been possible to obtain permission for all works to be included in the gallery. This is, therefore, only a small selection from the hundreds of pictures Mai has painted in the last sixty-five years.

For more information about the artist, her painting, life and her writing – visit Mai Griffin’s Writing Blog

Owing to the limitations imposed by this method of reproduction, colours do not do justice to the original artwork and can only be an approximate guide to quality.

You can find out more about which cookies we are using or switch them off in settings.

This website uses cookies so that we can provide you with the best user experience possible. Cookie information is stored in your browser and performs functions such as recognising you when you return to our website and helping our team to understand which sections of the website you find most interesting and useful.

Strictly Necessary Cookie should be enabled at all times so that we can save your preferences for cookie settings.

If you disable this cookie, we will not be able to save your preferences. This means that every time you visit this website you will need to enable or disable cookies again.